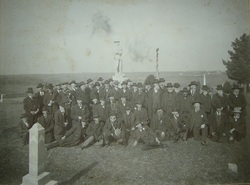 Memorial Day, originally called Decoration Day, is a day of remembrance for those who have died in our nation's service.  Memorial Day was officially proclaimed on 5 May 1868 by General John Logan, national commander of the Grand Army of the Republic, in his General Order No. 11, and was first observed on 30 May 1868, when flowers were placed on the graves of Union and Confederate soldiers at Arlington National Cemetery.

Elmwood has had a long tradition of Memorial Day Services dating back to after the Civil War when members of the Grand Army of the Republic (G.A.R.) Post marched from the G.A.R. Hall to the cemetery with wreaths to decorate the graves of their fellow comrades.  This year will be a special Memorial Day weekend as we will also commemorate the 125th birthday of Elmwood and the G.A.R. Hall.  Services, coordinated by the American Legion Post 247 and Sons of the American Legion, are held near the G.A.R. Monument in the cemetery at 10:00 a.m. each Memorial Day.  Please join us for the traditional march from the G.A.R. Hall to the cemetery at 9:20 a.m.  Following the services, stop by the Community Center on Main Street for lunch and then tour the Elmwood G.A.R. Hall Veterans’ Museum at 124 East “D” Street.