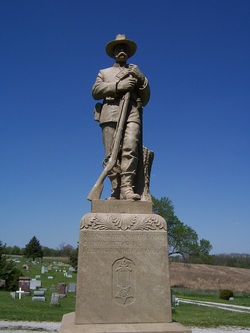 The G.A.R. monument at the Elmwood cemetery was dedicated on November 7, 1903, in the forenoon; and a program was held in the opera house in the afternoon.  Governor John H. Mickey spoke at the cemetery. The cost of the cenotaph, a monument erected in memory of a person or group of people, who are buried elsewhere, was $400.  It is 13 feet high and came from Bedford, Indiana, and was the only one of its kind in Cass County.  There was a large crowd present as the Murdock band furnished the music for the day.  A parade went from the G.A.R. Hall to the cemetery.  Mrs. Marrittie Dickson, wife of A. B. Dickson Civil War veteran and Adjutant of G.A.R. Post 123, unveiled the monument.

The Elmwood G.A.R. Post originally had $3.79 in their treasury when they started planning to erect the monument.  They presented a play on the evening of May 30, 1903, and earned $86.70 to put in a separate fund for the cenotaph. On April 25, 1903, the Elmwood Cemetery Association voted to donate $50 to the monument fund. The G.A.R. Post raised the additional funds needed including hosting their traditional bean supper.