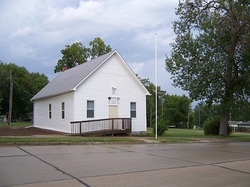 Elmwood was founded in 1868 and incorporated in July 1886 as many Union soldiers took advantage of the Homestead Act and settled in this area.  A very active G.A.R. Post was established to provide camaraderie for the veterans and support for the widows and orphans of the Union soldiers and a G.A.R. Hall built in 1886 for their meetings and social events.

Fulfilling a long-time dream of the World War II veterans of our American Legion Post, in 2004 with the assistance of the Elmwood-Murdock High School FBLA students and a Learn and Serve Grant, the G.A.R. Hall was renovated and a veterans’ museum created to help preserve the rich military history of our area.  The hall is a reminder to us and to our children of the presence of Civil War veterans in the Elmwood-Murdock area and the role they played in the growth of this community after the war.  At one time there were over 100 G.A.R. Halls across Nebraska; now there are only four, Elmwood, Falls City, Grand Island, and Nebraska City.

The G.A.R. Hall Veterans’ Museum houses many displays of our local veterans and is honored to play this role in helping to preserve the history of Elmwood.  The museum is open on Memorial Day and Veterans Day and other scheduled times throughout the year.  If you would like to see the museum, you can always call and a member of the American Legion Post would be more than glad to show you through the museum at any time.